Stuff for novice PCs to know and do 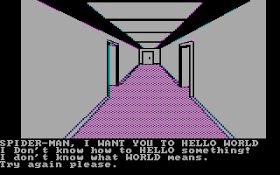 When I was 10 or so, I'd gotten my hands on a Spider-man text adventure game that I could run on my Commodore 64. By then games had far outpaced the ol' texties, but I still wanted to play--this being my first of the kind. The game came with no manual, and therefore no entry point by which to understand what the frak was going on.

I remember not getting past the first screen for a LONG time because everything I typed into the computer was met with the same unblinking response from the computer: I DON'T KNOW WHAT ______ MEANS. Fun times! Ah, time to switch to playing Archon...

Anyway, it wasn't until many years later that I'd blundered into an online forum that laid out the options. I was stunned! You mean the game wasn't broken?

I imagine that's how my novice players might be feeling when we're in the thick of things. They've found themselves somewhere between not wanting to make a mistake (and get their character killed) and just plain, not knowing what should come next.

Mostly, they let me take the lead, but I've tried many times to encourage them to just start exploring.

The problem is, some of them don't get what that means.

So in the interest providing them a players' aid, I've started a list of things they can do. Now this sounds...stupid. I get that. And these are not uncreative people, by any means. In fact, they are enthusiastic, but usually just nonregular gamers. So this can be for novices and those players long out of practice.

I've posted and earlier list of things players need to investigate when they're learning about the campaign setting. This is different. This is literally a (not nearly exhaustive) list of tasks and tactics.

A few other, general pieces of advice.
I want to add much more, so feel free to add to this list (or suggest any links) in the comments. I'm thinking I'll post a "final" list on the Rad Astra players companion blog. Thanks!
Jay Exonauts at 12:29 AM
Share